People choose to live in this warm and friendly district for the lifestyle and opportunities offered. 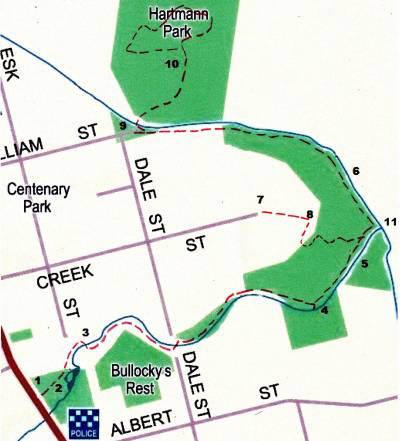 Parking at the eastern end of William St.

There is a short walk within the park. Applegum Walk connects to Bullockys Rest.

Sandstone shelf  – the walk passes over a shelf of sandstone rock which offers some magnificent landscape and geological features.

Soil variety – there is an interesting variety of soils, from loose sand, alluvial clays to hard sandstone rock, allowing for a diverse range of native species to flourish.

Human influence has been minimised along the track and on the northern side of the creek, allowing for a largely undisturbed natural ecosystem to thrive along the walk. 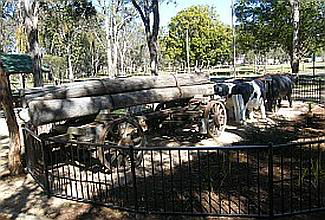 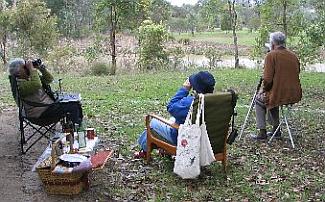 Bullockys Rest was originally used as a camp for bullock teams hauling timber from Cooyar to Toowoomba because of the fresh water supply.

A Waterbird Habitat was developed by Crows Nest Shire Council in 1994 with the construction of two low weirs and associated revegetation. This has since been changed radically by the floods of 2011.

There is a picnic area with a gas barbecue next to the waterbird habitat. The replica bullock team, two shelters and a toilet block have been installed by the Crows Nest Lions Club. Funding from the Heritage Community Branch enabled the installation of a flagpole and lighting.

The picnic area is dominated by eucalypts and a Rough-barked Apple (Angophora sp), reputed to be the tree with the crows nest where the bullockies met. This may have been he origin of the town’s name.

is a track linking Bullockys Rest with Hartmann Park 1.5 km away. 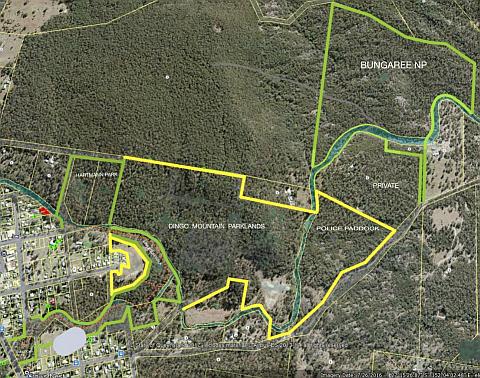 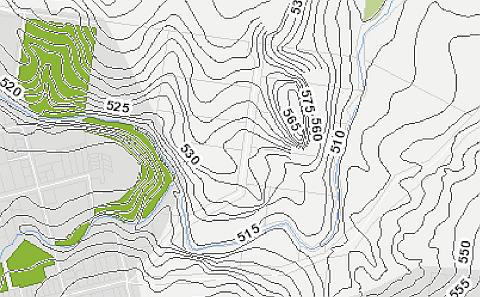 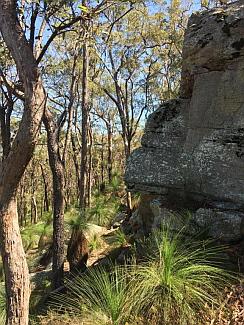 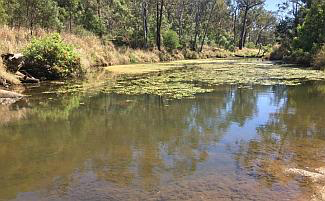 In early 2018, Crows Nest Community Solutions Ltd (CNCS), a related company to Progressive Community Crows Nest Ltd (PCCN) and a registered charity, acquired 45 hectares (110 acres) of private land on the eastern outskirts of Crows Nest. The land is between Dingo Mountain Road and Three Mile Road, and includes Dingo Mountain, which has been almost untouched by man both before and after European settlement. It is separated from the town by Bald Hills Creek and Crows Nest Creek.

Since then CNCS has also acquired a lease over the Police Paddock from the Qld Government.

Dingo Mountain Park is neighbour to other conservation areas: Hartman Park to the west, and the Bungaree section of Crows Nest National Park north of the Police Paddock.

The contour map shows Dingo Mountain 585 metres above sea level, with the lowest land along Bald Hills Creek, dropping from 520 m down to 510 m along Crows Nest Creek where it meets Old Womans Hut Creek and enters Bungaree.
History

Aborigines from the east traversed the park on their way to the triennial Bunya Feasts in the Bunya Mountains, when trading took place between tribes, marriages were arranged, and disputes settled. In language, the track over the range was Dumba-Kunga-Mi.

In 1848 James Canning Pearce had a pastoral run in the area. No record exists of why he used the name Crows Nest for the run.

Timber-getters were attracted to the area, but little logging took place in the park area.

The town of Crows Nest was surveyed in 1887.

The lower areas of the park were used for grazing and cropping, and a free-range piggery was established. The pigs were fed with whey piped down from the butter factory in Crows Nest.

The Toowoomba Field Naturalists Club has records of visits to the area over the last 30 years.

Koalas (Phascolarctos cinereus) listed as vulnerable in Queensland have been recorded. Other species include Greater Glider, Sugar Glider, Feathertail Glider and Brush-tailed Rock-wallaby.

The underlying rock is sandstone. Dingo Mountain is visited annually by geology students from the University of Southern Queensland

An aboriginal bora ring has been reported in the area, but has not been located.

Currently, CNCS is preparing long term vegetation and landscape enhancement plans with key stakeholders. A key outcome of this process will be the establishment of an ongoing, community based support group 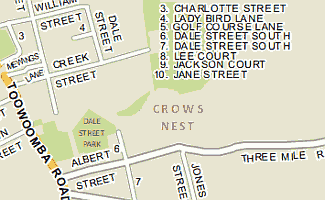 This unfenced local park provides open space next to the helicopter pad. (The park was the former site of the Crows Nest School.)

The nearest toilet is in Bullockys Rest. 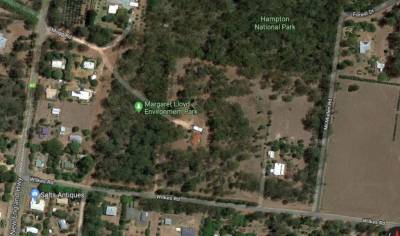 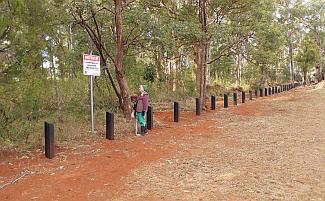 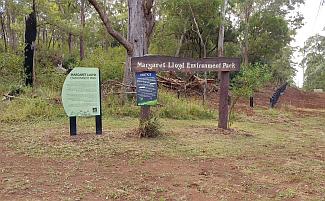 The Margaret Lloyd Environment Park conserves this small area of tall open forest, characteristic of the vegetation on the Great Dividing Range in the Hampton District. This park straddles the top of the Range and is included in the catchments of both the Brisbane River and Murray Darling River systems.

The  park is named in honour of the conservation values of one of the district’s pioneer residents.

Margaret (6/10/1910 – 7/6/2009) was the daughter of dairy farmers Paul and Maud Doig. She was born in Crows Nest, educated at Merritts Creek and Geham State Schools, and Brisbane Girls Grammar School.

She became a teacher, beginning her career as a pupil teacher at Geham State School, after which she was transferred from the district.

She returned in August 1971 to live at Hampton and concluded her teaching career at Crows Nest State School.

Margaret had a passion for the environment and fought to have this area declared a park, free from development.

Habitat: Tall open forest infested with lantana and privet. It is currently being cleaned up by the TRCbushlands park staff.
Birds that have been reported in this location include Speckled Warbler, Brown Thornbill, Golden Whistler, Silvereye. 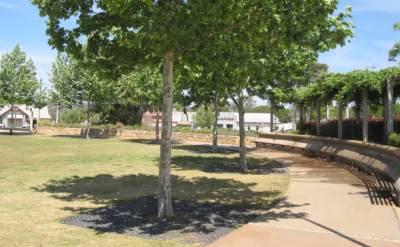 It is a Magical Park. Download the App to your phone to find a digital fantasy land.

If you sit on one end of the curving sandstone and timber seats within the park and speak really softly to your friend who is sitting on the other end of the seat they will be able to hear what you say (as long as there is no one in between). This is a little secret design feature of the seats which relies on the precise set-out of the circumference of the wall.

Origin of a Name?

An apocryphal story is that Crows Nest is named after an aboriginal man called Jimmy Crow, who lived in a hollow tree near the present police station. Timber hauling bullock teams would stop in this area overnight and Jimmy Crow used to give them directions. There is a statue of Jimmy Crow in the Park.

Another version is that it was used as a camping place by teamsters and travellers. It is said that they would agree to meet “under the crows nest in the old Applegum tree”.

It is more likely that the name was derived from a pastoral run name used by James Canning Pearce in 1848. No record exists of why Pearce used the name Crows Nest for the original pastoral run. 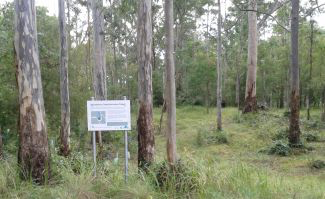 This six hectare Reserve is on the corner of Palmtree Rd and Perseverance Hall Rd, Perseverance Reserve, Palmtree, Qld.

The entrance is located along Perseverance Hall Rd, over the creek, just before it joins Palmtree Rd (and opposite an orchard of netted Persimmons).  There is also an entrance about 100 m along from the corner in Palmtree Rd.

Ravensbourne Landcare (Contact 07 4697 8047) have done much rehabilitation work and have spent some time surveying flora and fauna. 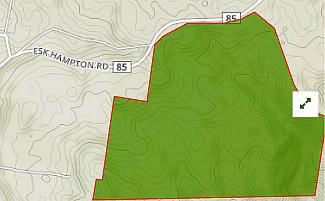 Access is from Esk-Hampton Rd at Somerset Region boundary. Turn south (opposite Somerset Region sign) up a dirt track. Go through the fence at the locked gate and walk down the fire trail.

Ravensbourne Nature Refuge is Site E4 on the East Bird Trail of the Crows Nest District.

Birds that have been seen on this location include Wonga Pigeon, Glossy Black-Cockatoo, Variegated Fairywren, White-browed Scrubwren, Red-browed Finch and Silvereye.

Management intent and use

The nature refuge will be managed, under the conservation agreement between the land-holder and the Minister 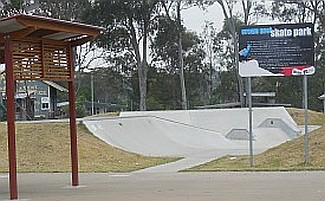 Centrally located in the park is a skate bowl, bike track, shelter and picnic tables.

Toilets are located on the western side near the Crows Nest Museum.

The southern part of the park is made up of a cricket oval with artificial grass pitch and club house.
Recreation Tce, Crows Nest, Qld

The northern area of the park is a lightly treed area.

A Community Garden is currently being planned for the south western corner of the park incorporating the old cricket shed. Landscape architects from Toowoomba Regional Council and the Crows Nest Community are currently designing the garden.